In the period October 23 – 25, 2020, the Bulgarian Euro-Atlantic Youth Club, with the support of the U.S. Embassy in Bulgaria, organized Global Academy 2020 – a three-day seminar, aimed at initiating a debate and exchange of opinions on contemporary global issues. The event took place at the Bankya Palace Hotel, in the city of Bankya.

Global Academy 2020 gathered 25 Bulgarian students and young professionals between the age of 20 and 30 years old. The participants in the seminar were chosen on the basis of CVs and motivation letters. The approved applicants were given the opportunity to take part in lectures and discussions with representatives of state institutions, non-government organizations, media and freelance experts, in order to discuss the current challenges and concerns before modern societies.

With the entry into a new decade and the current COVID-19 pandemic, experts are asked how countries should spend their growing resources, what threats and challenges they must prepare for and what new technologies will be needed to counter current and future security threats. Global Academy 2020 concentrated on these particular questions, seeking to encourage a dialogue and to generate fresh ideas and solutions, which could then be spread among the wider public, and in particular the young generation, which holds the power over the future development of global affairs and institutions.

The program of the Global Academy included lectures and discussions on the following topics: The UN System: Is Multilateralism Adapting to the New Global Challenges; The Path of a Young Professional at the UN; NATO-EU Cooperation: Guaranteeing Peace and Security in Europe; The Trans-Atlantic Bond after the Coronavirus Pandemic; Terrorism and Biosecurity; Women in Security: Gender Issues 20 Years after UNSC Resolution 1325; Unconventional Security Threats: Military Transformation and Reform; Hybrid Warfare; Climate Security; Three Seas Initiative: Euro-Atlantic Strategic Project. The seminar also included a Diplomatic Protocol and Ettiquette Training. 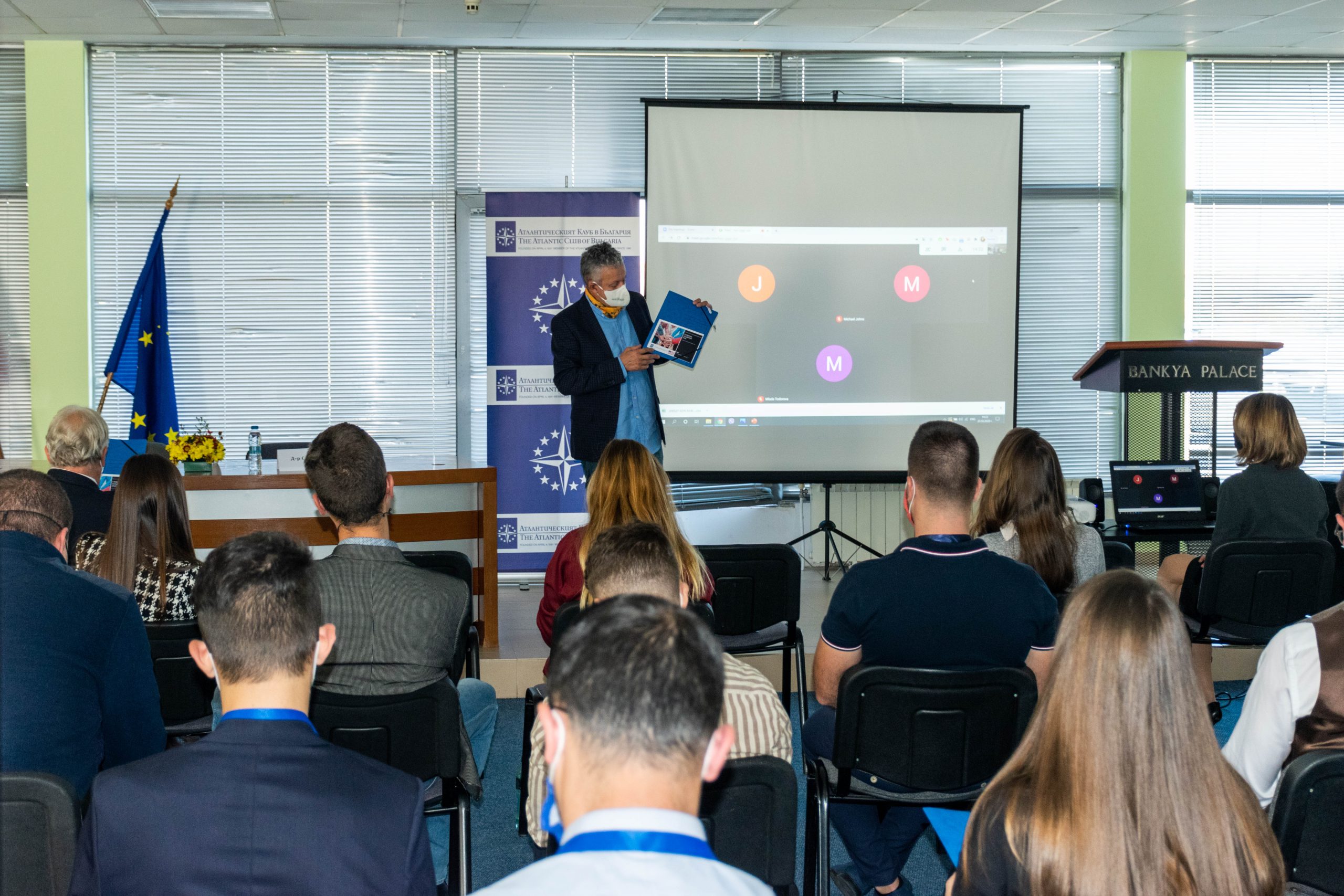 In 2018, the Bulgarian Euro-Atlantic Youth Club and The Atlantic Club of Bulgaria (ACB), with the support of NATO’s Public Diplomacy Division, launched the project “NATO Youth Ambassadors”. The project was dedicated to NATO’s #WeAreNATO campaign and had the following objectives:

The project encompassed the creation of three educational videos within the period of July – September 2018 and the organization of 20 trainings for high school students in several cities and towns in Bulgaria, in the period of September – October: Sofia, Veliko Turnovo, Vidin, Pazardzhik, Plovdiv and Varna.

The topics of the videos were chosen so as to contribute to increase awareness and understanding of NATO and its role in the global security, as well as to build support for collective defense (Article 5 of the Washington Treaty). The videos were disseminated via BEAYC’s and ACB’s social media channels (Facebook, Twitter, Youtube), as well as via national TV broadcasters, and were used for educational purposes during the trainings in the next stage of the project.

The target groups of the trainings were not only young people as a whole, but those who represented minority groups as well. The trainings included the introduction of the concept of common defense, the role of NATO as protector of its citizens, the role of Bulgaria in the common defense policy and its contribution to the Alliance. The youngsters were trained how to spread the word about causes they cared about – using promotional and creative instruments, such as making a video or design, or organizing a social media campaign. In this way, they were presented with skills that would be useful in their future, in order to be actively engaged in civil dialogue – within their own communities, but also on a national level. At the end of each training, participants would fill-in a short feedback form on how their knowledge and understanding of NATO had increased, and what had changed in the way they perceived NATO’s role and Bulgaria’s NATO membership. This feedback was then used to evaluate the results from the trainings and for the purposes of adjustment and improval of the methodology for the upcoming trainings within the scope of the project.

As a follow-up of the trainings, the young people would test their new knowledge and skills by creating their own projects explaining the role of the Alliance through their own point of view. The final phase of the project included a contest based on a video, essay or design on “What would the world be like without NATO?” A special jury selected 29 of the most impressive works and their authors were accordingly selected as the first NATO Youth Ambassadors to spread their knowledge and understanding of the Alliance among their peers.

In February 2020, BEAYC and ACB launched a second edition of the Youth Ambassadors project. The 2020 program started with a nation-wide open competition in a couple of rounds (motivation letters and interviews). At the end of the selection process, 15 young leaders were selected to be the next NATO Youth Ambassadors. The Youth Ambassadors will have to organize 8 local meetings with young people, in a team of two, initiating interactive discussions on the importance of Bulgaria’s membership in NATO and NATO’s mission and role. They will also visit the NATO HQ in Brussels, to enhance their knowledge and impressions of the organization.

In 2014, the Bulgarian Euro-Atlantic Youth Club organized the first NATO Summer School in Bulgaria, which would subsequently develop into a long-term project. Every year since 2014, the BEAYC has been gathering 25 – 30 young people with an interest in international relations, national and international security and defense, in Smolyan, Bulgaria, during the first week of June 2020. The purpose of this international seminar is always to discuss the current challenges and concerns before NATO. To do that, the Summer School gathers representatives from state institutions, universities, NGOs and the media, as well as freelance experts working in the field of international affairs and the prevention of unconventional security threats. In this way, the Summer School provides the opportunity for a theoretical debate and exchange of opinions, as well as for finding practical solutions that could then be considered by NATO’s command structures and member countries in the context of the Alliance’s future development.

Among the topic areas that have so far been considered during the NATO Summer Schools are the protection against unconventional security threats, the need for military transformation and reform (including in the field of science), cyber security, hybrid warfare, counter-terrorism, maritime security, the role of women in peace and security, NATO-EU collaboration, the impact of Brexit and NATO-Russia relations. The activities involved in the Summer School enrich the participants’ knowledge about NATO, the global problems that the Alliance is facing and how it intends to fight them. The learning methods include lectures, workshops and information-sharing via informal meetings between the participants. The aimed impact of the Summer School on its participants is to increase public support for NATO via increased knowledge, awareness and understanding of NATO, its values and longstanding role in safeguarding global security. The project aims to produce content that can be shared widely within and outside traditional NATO and NGO networks, and to present a view of NATO that connects with citizens on a personal level, by sharing human stories and favouring innovative and non-traditional approaches to security.

Among the more specific goals of the project are:

Information about the Summer School is distributed through an invitation sent to the Youth Atlantic Treaty Association (YATA), of which the BEAYC is part, and through dissemination by YATA across the national YATA chapters. An invitation is also posted on the webpages of the BEAYC and ACB, as well as on their social media pages (Facebook, Twitter, etc.). The participants are then selected on the basis of their CVs and motivation letters.

NATO and the Next Generation

In 2019, the Bulgarian Euro-Atlantic Youth Club (BEAYC) conducted a 7-month project consisting of several types of activities aimed at increasing public support for NATO. The target groups of the project, named “NATO and the Next Generation”, comprised the successor generation (15 – 30 years old young persons from big cities and small towns, including less economically developed areas) and non-specialized audience (the broader public, opinion makers and journalists).

The goals of the project were to:

The events that were part of the project sought to reflect on NATO’s 70th anniversary and the 15th anniversary of Bulgaria’s membership in NATO. They included:

On 4 April 2019, on the occasion of the signing of the Washington Treaty and Bulgaria’s accession to NATO, BEAYC and and The Atlantic Club of Bulgaria organized a public screening of the three videos dedicated to NATO, created as part of its NATO Youth Ambassadors project in 2018: “70 Years #WeAreNato”; “70 Years Peace in Europe”; and Unity is Our Force”. The event, which was held in Bulgaria’s capital city, Sofia, gathered a community of journalists, decision makers and civil society representatives, with the purpose to boost an informal communication between leaders in their own field, who could then multiply the message of the “importance of Bulgaria’s membership in NATO” and “NATO’s benefits for the security of its Member States”.

On 20 April 2019, in Sofia, BEAYC organized a NATO Model Simulation at the Georgi Rakovski Military Academy in Sofia. The aim of the event was to bring together civilian and military students who would participate in a simulation of the North Atlantic Council (NAC) decision making process in a multidimensional fictitious but realistic international crisis situation that was challenging or threatening to the security of the Alliance. The simulation scenario included both vertical and horizontal issues, including regional threats to security, hybrid warfare and climate change problems, to better reflect the complexity and unpredictability of the present security environment. The scenario included fictitious countries as well. The 30 participants played the role of the Permanent Representatives (PERMREP) of NATO Member States and Members of the Partnership for Peace program. One participant took the role of NATO’s Secretary General. Each participant presented the position of their assigned country on the simulation scenario, after which a discussion followed among all of the participants. The simulation ended with the adoption of a NAC Decision.

In April and May 2019, BEAYC organized small discussions with the NATO Youth Ambassadors in their own local communities. The Youth Ambassadors are 29 young people from all over Bulgaria, selected via national competition to multiply the understanding and key messages of NATO among their peers. The Youth Ambassadors were chosen as part of BEAYC’s and ACB’s NATO Youth Ambassadors project in 2018. The discussions were held by team splits (2 Youth Ambassadors per place, together with one NATO Info Cenр team member to support them). The young ambassadors had the flexibility to choose their audience and venue, thus providing for the diversity of the meetings, which were held in school classes or school clubs, local clubs, youth organisations or youth informal groups. The discussions took place in the following cities and towns in Bulgaria: Sofia, Veliko Tarnovo, Varna, Yambol, Bourgas, Tutrakan, Pazardzhik, Kurzhali, Sliven, Dimitrovgrad, Peshtera, Plovdiv, Karlovo and Vidin. Each meeting had an audience of 15 – 20 young people aged between 15 and 25 years old, thus reaching a final number of 430 – 500 young people directly affected by the activities. 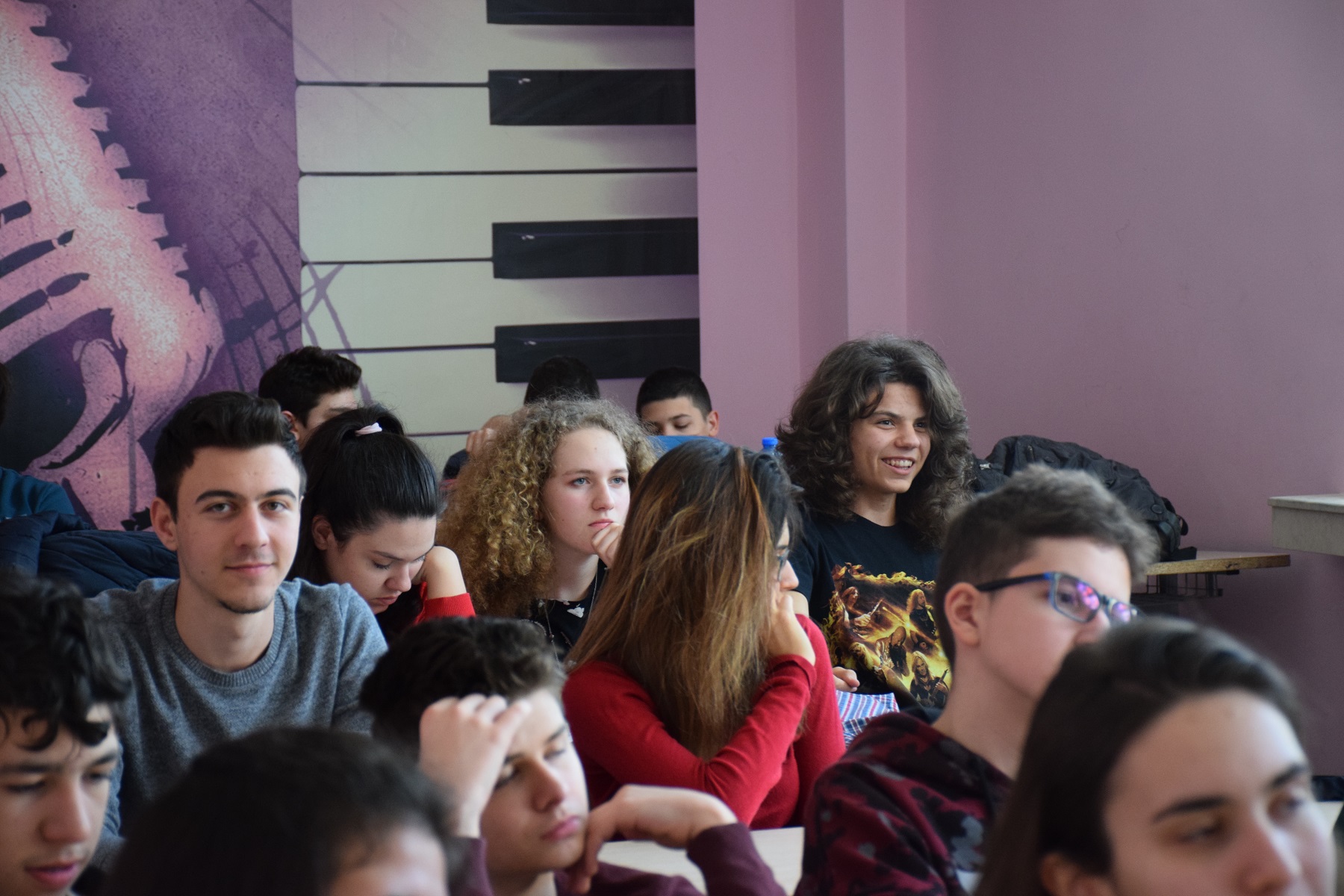